Jack to a King 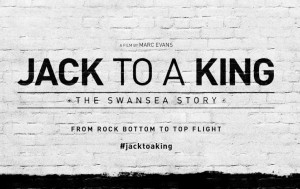 Elin Rees PR were approached to devise and manage the online outreach, promotion, PR and Social Media for ‘Jack to a King – The Swansea Story’ the much-anticipated documentary film about Swansea City Football Club, directed by the award winning Marc Evans. We were given the project two months before its release date and succeeded in a fast turnaround, gaining the film extensive coverage across target media platforms – both within Wales and nationally.
Despite the film’s limited release, we managed to secure a review of the film in every major broadsheet and tabloid newspaper. Elin Rees PR also managed press, photographers and TV crews at the film’s premiere at London’s Leicester Square and a homecoming gala in Swansea.

In addition to managing PR for the film, we were also tasked with handling the film’s social media campaign. This involved releasing and gaining the biggest audience possible for the Jack to a King trailer and, over the two months, successfully engaging and in turn, developing an audience for the film via social media.

As detailed below, we achieved a great presence for Jack to a King across television, radio, online and in the print press.

“We had the pleasure of working with Elin Rees PR throughout the theatrical release campaign for the Swansea City documentary ‘Jack to a King’ and found the team to be extremely personable. We were also delighted with the amount of media coverage achieved both nationally and regionally, in print and broadcast and both English and Welsh! In addition, the team delivered an engaging social media campaign increasing our following tenfold. Since then, we have commissioned Elin Rees PR to work again on our latest film project and are looking forward to seeing the results.”