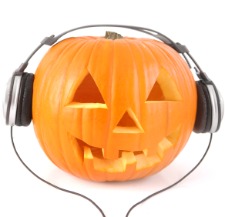 I do love a good ol’ themed playlist and seeing as tonight I have no viable reason to dress up as something scary, this will be my contribution to the Halloween frivolities.

Mogwai – Kids Will be Skeletons

I’ll go out on a limb to say this is one of the best tracks recorded by Mogwai, I think it’s an amazing listen. It’s not a track to gear you up for a night out, or a track to listen to when you’re feeling sad. It’s just a song you put on and listen to and then at the end say to yourself, ‘That was bloody good.’

Explosions in the Sky – Welcome, Ghosts

This is almost the whole reason why this playlist has been constructed. I love the song and was listening to it when it suddenly struck me it was near to Halloween and that the song could make it into a playlist of scary themed songs. Perfeck!

This is one to listen to with a cup of tea once all the trick or treaters have gone to bed.

If you’re even thinking of going near a car this Halloween, make sure you have the means to play this song out of its speakers. Whether you’re dropping off trick or treaters, going to buy a pumpkin from Budgens or making a speedy getaway from the house you’ve just egged – this song transcends any situation possible.

If you didn’t know then I’m sorry to be the bearer of bad news, but the original performer of this hit sadly passed away not too long ago. BUT don’t cry as all sorts of people have since stepped up and covered many of his hits, and this is one of the very best. Imogen Heap’s unique and interesting vocal style and some delicate piano make this an absolute must to listen to.

(Spoo)Key Lyrics: “It’s close to midnight and something evil’s lurking in the dark.”

A stupidly easy choice I know. Probably the most well known Marling song and it’s easy to see why. Simple, pretty and kitsch.

Key Lyric: He would stare at empty chairs. Think of the ghosts who once sat there

Right up the top of my all time favourite songs and incredibly apt for this list, the 1994 song ‘Zombie’ isn’t really all about those slow walking flesh craving things we all love to hate, but instead was written about the death of two boys killed in an IRA bombing. The song is sung brilliantly and is accompanied by a quite grungy sounding guitar, unlike other songs recorded by The Cranberries, and this makes is stand out even more.

Anyone who’s read anything I’ve written before or knows me knows that I’m a little bit obsessed with Patrick Wolf’s music. I think it’s pretty important to emphasise that this is nothing to do with Kate Nash’s song of the same name. Instead this is a beautifully crafted ballad from Mr Wolf back in 2002, found on ‘The Patrick Wolf E.P’. With the backing of a violin and piano, both recorded by Wolf, we’re given a glimpse back into our childhood, when things were simple and beautiful.

Key Lyrics: “You watch as autumn takes its last breath of summer, the pumpkin soup on the table, the late September sun.”

Things That Go Bump in the Night – allSTARS

An incredibly cheesy pop song from 2002, yet also a song which is unashamedly catchy and would go down a treat at any kids disco. Yes it is a kids disco song, but it’s better than nearly all the drivvle churned out today. Try it out…

(Spoo)Key Lyrics: You cannot run and you cannot hide, you’ve got to face it baby things go bump in the night.

Without a shadow of a doubt one of the most intensive and brooding pieces of music I’ve ever heard and I absolutely love it. Used in the Danny Boyle film ‘28 Days Later’ for the scene where Cillian Murphy frantically runs around a mansion whilst zombies pick off all the other characters, the song encapsulates a range of emotions and feelings from fear, to anger, to fear, to adrenaline and back to fear all within 4 minutes.

The song was more recently also used in ‘Kick Ass’.

I know this is all a bit 1999 but I still think this theme tune is one of the best! I’m a big fan of Joss Whedon and the theme to his most famous project is very listenable and only short.

The Big If – Monster

‘Monster’ was always going to be a word which crept into this Halloween playlist, and many of you may have instantly had ‘What’s that coming over the hills’ intrusively thrust into your head at seeing the word. However this is not the case, instead what we have is Ryan Key of Yellowcard and his side project. Monster is just one of about 8 songs which have been demoed and put up on the bands playlist and are sounding damned good.

(Spoo)Key Lyrics: “Hello Monster, how have you been? Did you travel very far?”

Bring Me The Horizon – It Was Written in Blood

A current massive guilty pleasure of mine is this northern bunch of lads who do screamo and metal and generally good tunes. Their old album, ‘Suicide Season’ is genuinely one of my favourite albums of last year and the follow up album ‘There is a hell believe me i’ve seen it, there is a heaven let’s keep it a secret’ hasn’t stopped being played by myself over the last month.

It Was Written in Blood is a perfect example of why this band are so damned listenable; catchy guitar rifts and Oli Sykes screaming his lungs out, but in an unexplainable ‘I can’t stop listening’ way.

Panic! At the Disco / Marilyn Manson – This is Halloween

Panic! work their magic on the ‘Nightmare before Christmas’ classic theme with great results. Brendan Urie’s vocals are, as per usual, on form and with the full string accompaniment this has the little taste of Disney in it, but yet it also works as a Panic! song. Very apt for obvious reasons, plus the film is awesome.

If Panic! Doesn’t quite tickle your fancy, Marilyn Manson has also covered it and it’s exactly as you can imagine; dirty guitar, no strings, and Manson spitting the words with venom.

(Spoo)Key Lyrics: “This is Halloween, everybody make a scene.”

The first CD I ever got was actually a Lightening Seeds one, and because I’m so aware of this and remember the moment so clearly I’ve always held a little place in my heart for the band. Ghosts is actually a brand new track from the Lightening Seeds and is definitely worthy of being on this list, even if they hadn’t been ‘my first’.

Key Lyric: “All the ghosts inside my room, Are laughing in the evening gloom.”

I remember how excited I was first time I heard this back in 2006 and fell in love with everything this band did, which wasn’t a big surprise being the massive Blink fan I was. One of the most up-tempo songs and chosen as the opening to the album this shows off Mark’s voice and Travis’ incredible drumming ability.

Key Lyric: “And I still feel you looking over my shoulder, Your sinking guilt and approaching nightmare.”

Queens of the Stone Age – A Song for the Dead

Taken from the incredible ‘Songs for the Deaf’ this is textbook QOTSA, with the crunch of guitar we’re all too familiar with kicking the song off, it isn’t soon before vocalist Josh Homme completes the happy relationship between guitar and voice all in preparation for the killer guitar solo.

I wouldn’t normally plump for a Paramore song on a playlist I wanted people to check out, but this is quite a long way away from the comfort zone of the American pop rockers. With just an incredibly mellow acoustic guitar, Hayley Williams shows she really can hold a tune and the end result is a calming and stunning piece of music.

One of their catchier releases off ‘A Beautiful Lie’, ‘The Kill’ possesses a fantastically powerful chorus, interesting guitar work, a wide vocal range and an amazing video which parodies The Shining, all of which make this a shoe-in for my Halloween playlist.

The song that got me into this band and possibly one of their best.

Key Lyric – “Look in my eyes. You’re killing me, killing me.”