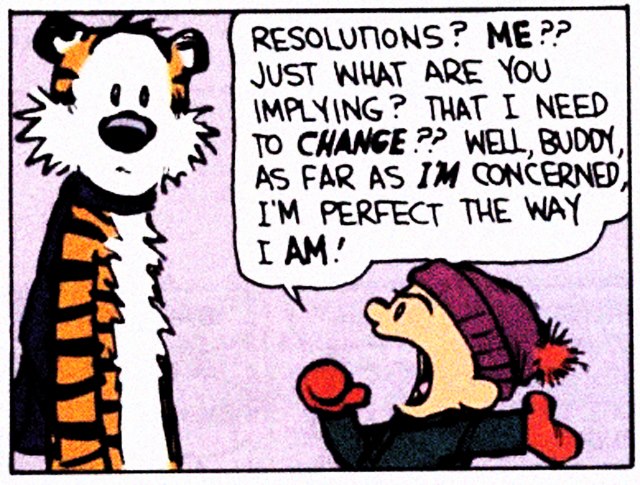 So, the University of Scranton’s Journal of Clinical Psychology has these stats on the most popular New Year’s resolutions that people made for 2014. Did you do make any? I read through the list and honestly, a lot of these things just seem like common sense. Making New Year’s resolutions seems to me like trying to mould this idealized version of ‘you’ that just can’t exist. I don’t have any issue with self-improvement of course but I think it’s important to look at why you are doing it or if you know, you could probably just do it now.

And humans just aren’t designed to be that way. We are meant to be flawed, addicted to things and messy.

Also giving something a definitive start date also implies that there is an end date, right?

Disclaimer: Honestly, you go do whatever the hell you like. I’m 22 and know nothing/everything. Though hopefully you are doing these things for you.

Okay, if it’s getting you down or like…if you’re ill, this is a really good idea. But the fact that this is number one…I’d like to think you aren’t doing it because perhaps your mate’s thighs don’t touch but yours do. Who the hell cares? The standards (let’s be real, mostly women) people are meant to abide with do not exist. Like Topshop had this ridiculous mannequin…I mean, that’s just stupid. The “standards” are probably manufactured by some old dudes in suits. So again, who the hell cares? I bet you look really nice.

This is a good idea but then is probably something you could do now. Right? Right? Where have you gone?

Why wait till the next year? You can go do this right now.  Make some time for yourself and go jump on skateboard or whatever rocks your boat. Go have fun.

This is so cute. It makes me really happy that this is on here. Honestly, do this.

Definitely a good idea…but yeah, do it now.

This is a bit weird…I get visions of people repeatedly dropping their possessions on the pavement in the hope that someone comes along to help them pick their stuff up and then shares LIFE-CHANGING eye-contact with them. Or even worse, forcing themselves to be in a miserable relationship because they think they should be. Again, I’m 22 and know nothing but I feel like falling in love isn’t something that probably sits on a to-do list. Think about it, it’s very similar to trying  to skateboard. Just go and have fun.

This is a very nice thing to do if you get on with your family. And you’re probably going to have had enough of them at Christmas anyway.

So that’s it. I bet if these stats came from fifty years ago, there would probably be pretty much the same answers. This perhaps says that our expectations of who we should be as people hasn’t really changed much at all. It also says that maybe New Year’s resolutions don’t really work.

Anyhow, since we’re talking life guidelines to go forward into the New Year with, I think Everybody’s Free (to Wear Sunscreen) by Baz Luhrmann  has some excellent advice. Give it a listen. My friends used it to convince me to go on the Batman roller coaster at Six Flags in St. Louis, Missouri. Which is to say, perhaps you have your own equivalent to that terrifying roller coaster and maybe you could give that a go? I ended up going on it twice.